Welcome to the UKYA Easter Egg Hunt! One very lucky winner will win a huge grand prize of signed books by over thirty YA authors who write and live in the UK.

All you have to do is read this blog, count up how many UKYA branded Easter eggs you see in the blog, and follow the link at the end to the next blog. Keep going until you get back to the blog where you started, and add up how many eggs you’ve seen along the way.

Email your answer to: UKYA2015egghunt@gmail.com. A winner will be chosen at random from all correct entries, and contacted by email.

This closes at noon (UK time) on Sunday, 5th April, and is open internationally.

So get finding those eggs! And some awesome UKYA authors and books along the way.

Welcome egg-hunters!   My name is Keren David and I write YA –  mostly contemporary realism, although I’m working on a historical novel at the moment.

My egg-citing news of the day is that I’ve just signed a contract to write a new book, with my publishers Atom, the YA imprint of Little, Brown. The working title is Cuckoo and it’s about a former child star who loses his way in life.

I’m egg-stremely happy that the Arts Council is giving me a grant to support the writing of this book. It seems strange that I once wrote a book about winning the lottery, and now am able to benefit from lottery money!  I’m very grateful to the Arts Council for this backing. 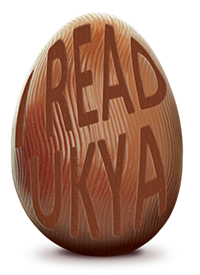 If you win the egg hunt then I’m contributing a copy of my new book This is Not a Love Story.  You may have to wait a few weeks, because the book only went to the printers this week, and is not officially published until May 7.

The Bookseller’s Fiona Noble wrote an early review of TINALS recently –  ‘I loved this coming-of-age story with a clever bisexual twist and a fabulously realised location. David lived in Amsterdam for a time and her love for the city is clear in her writing.’

This has been a bit of an egg-ceptional week, with my book Salvage

up for three awards. First on Monday was the Romantic Novel of the Year awards, a ceremony held in a very grand hotel, with Champagne flowing freely. Salvage was shortlisted in the YA section, which was won by Joss Stirling’s Stung –  which also won the overall Romantic Novel of the Year, a first for a YA novel. Huge congratulations to Joss, who had two books on the shortlist –  this is a big and well-deserved win for team UKYA!

Then on Wednesday I was part of an event for the shortlist of the Wirral Paperback of the Year, along with Berlie Doherty, Catherine Bruton, Nikki Sheehan, Marcus and Julian Sedgwick (by video) and Edward Carey (via Skype). The award is usually organised by the Wirral School Library Service, but they are temporarily homeless so the task was taken on by Laura Ferguson, librarian at Wirral Grammar School for Girls, who did a fabulous job. Thank you Laura! I now want to read everyone’s books –  I’m halfway through Nikki’s Who Framed Klaris Cliff? which is outstanding.  One of the nicest things about the Wirral award (which I won in 2011 and was shortlisted for in 2012) is that the event is separate from the actual winning, which happens in June. So, none of the tension and all of the celebration.

ALL of the tension tonight though because The Bookseller’s YA Book Prize is announced this evening. It’s been a pleasure and a privilege to  be part of the excitement which the prize team have orchestrated. I’m so proud that Salvage was on this inaugural list. Good luck to all the other short-listed authors.

Next week I’m visiting two schools in Essex, and trying to get some writing done.